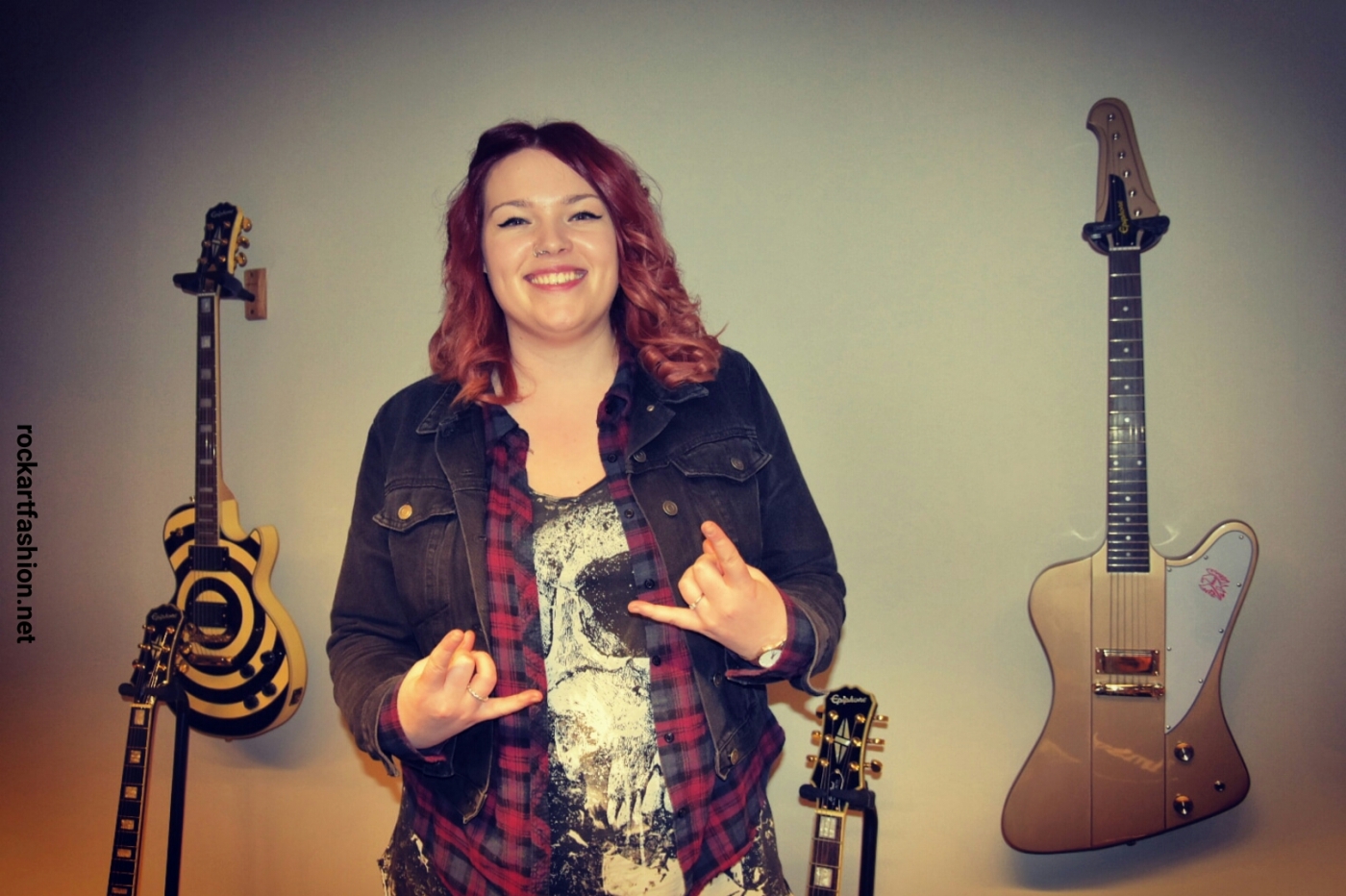 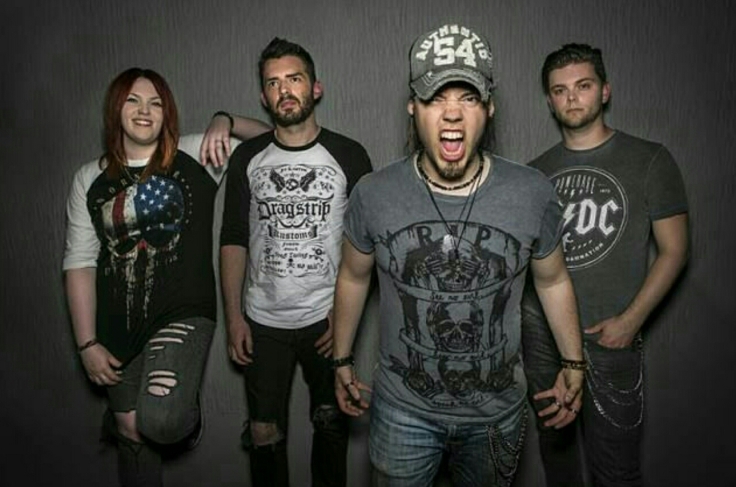 “Heavy, Melodic, Catchy”- this is how the lovely red head drummer of Stone Broken, Robyn Haycock, describes their second album, “Ain’t Always easy”, released on 2nd of March 2018 at Spinefarm Records and produced by Romesh Dodangoda (Motorhead, Bring Me the Horizon).

Revealed in 2014 with the self-produced EP “The Crow Flies”, the 4 – pieces British band did not waste much time and released a debut album in 2016, titled “All in Time” critically acclaimed and with singles largely played by radios like Kerrang! Radio or Planet Rock.

I had the pleasure to meet Robyn in Paris and had a fun chat about the band, the album, influences, grungy style and many more …

How did you guys meet and formed Stone Broken?

Robyn: Me and Rich met at college nearly 11 years ago. We were in the same music class, we were jamming together.

We met Kieron in a local pub, he was serving behind the bar and he played bass and we need a bass player. We had the same age, we loved the same music, we had the same influences. He knows Chris from his previous band so…we formed Stone Broken in 2013.

Robyn: When we started, we need to pay everything: new guitars, new drums, amps …we were really stone broke, we had no cash… so we thought that it’s a good name for the band.

In that way, if we ever have success in the future, with this name, we know where we come from.

For the moment, it’s working pretty well for you guys… already the second album in 2 years. What can you tell me about it?

Robyn: Yeah, right. Well, “Ain’t Always Easy” was written in 6 weeks. We were just coming up from the Glenn Hugues tour and we wrote the album, then we went to the studio for further 3 weeks to record it. It was quite stressful…

Ain’t Always Easy” is almost a continuation of the previous album: we have some ballads, some country, some kick off, hard rock songs…

You say “Ain’t always easy” on the song “Home”, what was the most difficult for you as a band?

Robyn: We supported some of the best bands, we played some big festivals… It wasn’t always easy, we had some lows and some highs, but we learned that you get somewhere if you work hard. You have to have the mentality and hopefully, you can get where you want to get.

Let’s talk about few songs … “Home”, what can you tell me about this song?

Robyn: This song was one of the last one we wrote acoustically and it is about being away from home, you know, home sickness. We were touring all last year, so we were missing home and its comfort.

Robyn: We released Worth Fighting For to give fans an anticipation of what is going to come and about what they can expect: it’s about the all Stone Broken sound: the punchiness, the big melodies and big choruses. It is a song to inspire a person in what he is doing. If you believe in something, just stand up and you’re going to do it.

How about you as a drummer, what is your favourite song of the album?

Robyn: I think the most challenging for me to play as a drummer is Heart Beat Way. You have the swing feel and the stumping beats in it, you can properly go into chorus… it’s a great song to get into it and do some headbanging.

You are doing a video also for this song?

Robyn: Yes, we have recorded it beginning of February and it is in editing process. It will be release soon, can’t wait for it.

Let me see it All?

Robyn: When we were writing this album, we wanted a stripper song, you know, a dancing song as every rock band has …like Poor Some Sugar On Me by Def Leppard. The lyrics are about addiction. It’s quite powerful.

What are your influences?

Robyn: As a band, big American Rock band as: Alter Bridge, Black Stone Cherry, Halestorm. We all have some common taste for certain music and it reflects in our song writing. But we listen to all sorts of music not necessarily rock but pop, country, punk. We draw our inspiration of pretty much everything…

Then personally, I was raised with Led Zeppelin, AC DC, Van Halen…Rich was born on Motown, funk, Keiron loves Whitesnake.

How did you choose to play drums?

Robyn: I play drums because I could not play guitar. My parents bought me a guitar first, but I had no patience for it. It was not for me. Then it was a drum kit in our school, I was 13, I took some drums lessons and I was really get into it. I think that I always had that passion for drums and it will never leave me now.

Let’s talk a bit about fashion – what’s your style?

Robyn: My style is definitely grunge. If it looks new it is not good. I love jean jackets, ripped jeans, jeggings, skulls.

I adore skulls, I am collecting them, all sorts of rings, earrings.

I love Converses and leather boots.

I am pretty grungy in life and on stage. The rocker look is always stuck with me.

What do you always take in your luggage?

Robyn: My jean jacket, some shirts, in general comfortable things to travel.

How about the stage, do you guys have a code for the outfit?

Robyn: There is no code but we all wear dark jeans, we all wear pretty much converses so finally, we all have a matching in a certain way.

What is the biggest advantage to be in a rock band?

Robyn: If you’ve got a story to tell and you want to point a cross, this is the best way to express yourself, with music. You also gain so many friends. Fans turn into friends.

It’s a real community, you receive a lot of love, you have fun and you have a good time.

How about being a girl in a boys’ band?

Robyn: We have a kind of running joke as Rich calls me “The Boss”. We are getting so well together. We have a great communication, we are best friends. We are going out together, we go to cinema, we go bowling, we are always together in some way.

Who would be your favourite artist for a collaboration?

Robyn: I think someone like Black Stone Cherry or Halestorm (Lzzy) or Slash. I’ll play with anyone. I think it is important as a musician to go, explore and play with other musicians, no matter how is gonna end. Even if it is only a jam, it’s great.

What do you think about social media?

It’s another way that we can speak with our fans. We try to get back to every single comment.

We also have a fan group on Facebook dedicated to Stone Broken, they are called the Broken Army.

They talk about the band before the gigs, relationships are formed, it’s just incredible.

I think it is so important these days for a band to be on social media.

What do you do in your free time?

Robyn: I love cinema, I am a big fan of horror films and I love to enjoy music, discover other bands. My life is mainly based on music. It’s my passion.

How about the tour?

Robyn: We start on 22nd of February, we will come in France on 16th of March. It will be great to go back to Forum (in Vaureal). We already played there last year with Glenn Hugues, the crowd was really great.

LET ME SEE IT ALL

THE ONLY THING I NEED

Let Me see it all

LET ME SEE IT ALL

THE ONLY THING I NEED