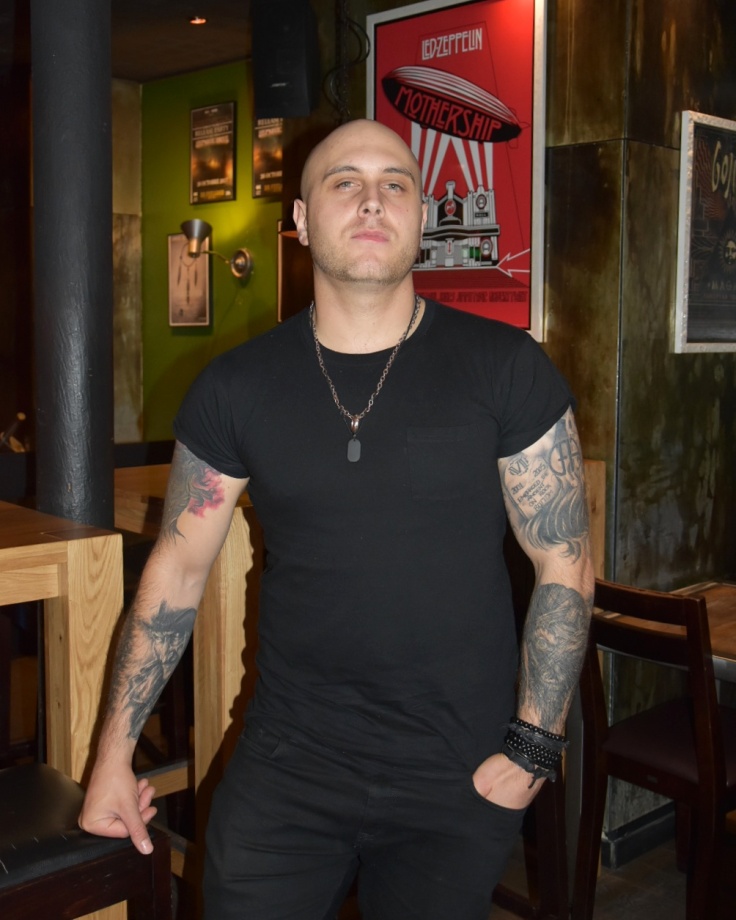 2017 was for me a year full of awesome musical discoveries. A lot of new great almost unknown bands in France join my playlist.

One of them is In Search Of Sun, a London-based alternative rock quintet.

Collecting the opening for groups such as Bullet For My Valentine, Funeral For a Friend, Pop Evil, or even Nothing More, In Search Of Sun released a debut album in 2014 which brought them a beautiful success across the channel.

Their second album Virgin Funk Mother just came out and I must say that it is an absolute gem.

Not so easy to put them in a box, their style is smart and varied – alternative, progressive metal with a bit of groove and funk, a lot of melody and catchy tasty riffs and above all a great clear, powerful voice and heartful lyrics.

ADAM LEADER – Vocals, RORY KAY – Guitars/Vocals, DAVID MENA FERRER – Guitars, FAZ COURI -Bass, SEAN GORMAN – Drums/Percussion will be playing in Paris on 5th of December 2017 at les Etoiles, opening for Nothing More and it will really a big shame not to go see them.

I had the great pleasure to meet the very nice singer Adam Leader who talked to me about his band, the new album, song about Bataclan, his passion for the Exorcist and its beautiful tattoos and about Nothing More.

Let’s start with the beginning, how did you start your band?

Adam: I wanted to start my band since long time. I remember it was summer 2010 and I met Dave in pub. We knew each other as his band and the band where I was in before were playing a couple of gigs together. He knew that I wanted to started a band so he asked me how it is going.

I told him that I am still trying to find band members. He plays me some riffs, it was so good that I asked him if he wants to do something together.

So, we started to play guitar together to my house or his, come up with some songs ideas and it was working very well. So, he suggested to bring Faz, as bass player, Rory and Sean joined us afterwards. And then, we played our first live together on 15th of April 2011.

Why “In search of Sun” as name of the band?

Adam: We used to be called Driven which for us, means the same as In Search of Sun – determination. It is the name of a song on our first album.

Actually, when we were writing it, we were thinking that it would be a good thing to change our name. We wanted something more mature and we thought that In Search of Sun reflect us as people.

Everyone is in search of sun, everyone wants to reach the top and achieve something.So, it was a good name for us and also a fresh new start. And then you know, we live in England and we are always trying to find the sun.

Good point. Second album for you now, what can you tell me about “Virgin Funk Mother”?

Adam: It is the best album into entire world – (he is laughing) – we are so excited for it, as musically it is exactly where we want be. We spent a lot of time and effort, sleepless nights, did a lot of sacrifices doing this album so I can’t wait start touring and show it to people.

How do you consider that the sound evolve since “The World Is Yours”?

Adam: Our first album had only metal influences. Then we toured it and we started grooving up a bit and maturing a lot more musically. We realised that we should not take influences only from metal.

We don’t have to be afraid and take inspirations from everywhere: Prince, Michael Jackson, Alicia Keys or from the heaviest bands like Slayer or Morbid Angel, it does not matter. We were honest and true to ourselves, so that’s how we evolved. We evolved to a more mature sound.

Tell me a bit more about the lyrics

Adam: The songs of the album are extremely personal. The majority of them are inspired by someone very close to me who had a lot of problems and suffers of depression. So, lyrically it is a little bit trying to reach out this person, because not enough people talk about it and you know, it is really important if something is bothering you to talk about it and accept this problem.

I wrote it in a way that everybody in entire world can relate to. If you read the lyrics you can interpret it whatever way you want.I want to spread the message to everyone about the unity and happiness. I think it is not enough love in the world. Everyone is just stressed and angry, separated and individual, the world just sucks now.

What’s your favourite song and tell me how you wrote it?

Adam: I think it is In the Garden.

Fun, it is mine too.

Adam: Wow, that’s awesome, so cool. Well, the story is simple. I was in my room with my guitar and I came up with this rhythm (he sings) and for some reasons, I thought to a garden and I use it as working title. So, we worked on it and it become the song that it is today.

The message behind it’s a massive metaphor. I was thinking to a negative state of mind that you can’t get out, the feeling that no one understand you, no one listen to you and just laugh at you if you dare to speak. It makes me thinking of someone with particular troubles, being in the garden and nobody want to play with him.

Adam: Really happy you like it, we should put it on a single.

And the last one on the record, why “Mon Amour” in French?

Adam: When we were writing that song, we watched TV and that news about the Bataclan attacks came up. We were so shocked and saddened about it, so we thought at it would be good to dedicate this song to the people who suffered, let them know that other people cares about them and stand up together. People need to support people.

And the lyrics are actually inspired from an article I read about a guy who was there and lost his girlfriend. That really touched me.

When I was writing the lyrics, I just kept thinking and imagining myself being there and loosing someone. 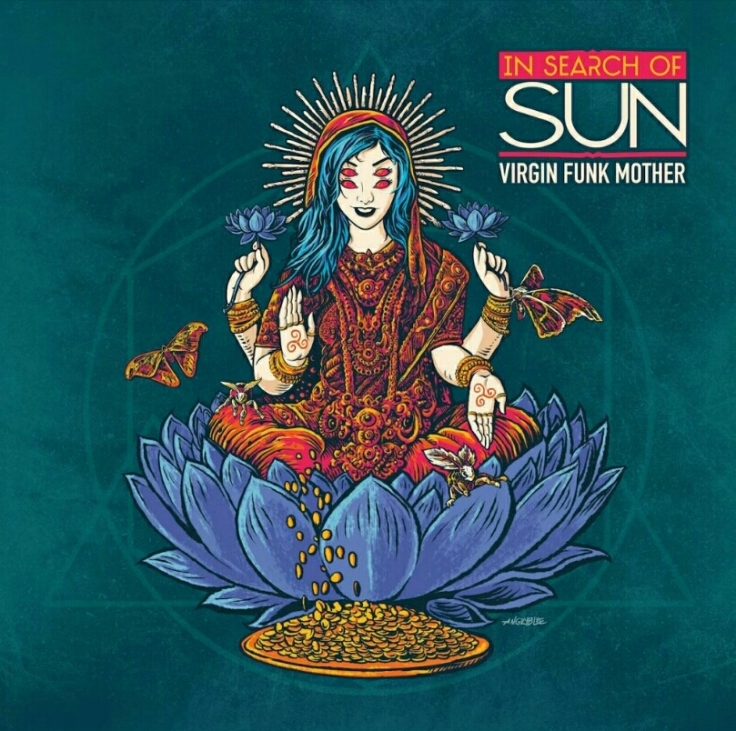 What can you tell me about the artwork of the album?

Adam: It comes from and Hindu imagery. None of us is religious, but we took this one as we like it and the message would be: just be yourself, don’t believe in fiction, live life and do no separated from the others because of their beliefs or colours of skin. Everyone is so judgemental these days and that’s because things like religion, politics or different taste in music…that’s such a nonsense.

Do you have a major artist that made you become a musician?

Adam:  Pantera. When I was 11, my friend Jeremy told me to check out this band so I bought Vulgar Display of Power and the second it starts playing, I was in love with them and I knew exactly what I want to do with my life. I want to do music that make me feel good.

What was the most difficult for you as band?

Adam: I think the journey in getting signed was the hardest and I mean by that, persevering for 6 years before anything happen. It was so long, putting all this time money and sometimes neglect people that we love.

It was great that SpineFarm Records recognize and believed in us.

The hardest was keeping our mind set and keep going. We had hard times and it is still hard and it is going to be, but you have to do a bigger picture in mind, as the fact as it is important to do something that you love and make you happy instead of being stuck in a job that you hate till you are 70 years old.

I think life it is short and it is better to suffer and loose a little bit of sleep earlier in your life in order to make things working. I think too many people give up too easy of their dreams.

What do you think about social media?

Adam: It’s a great way in engaging with people. We become friends with many fans and we keep in touch.

It is good also to be more visible as a musical and getting our music out on different platforms, getting people to see. It is really helpful.

So, you will start touring now?

Adam: Yes, we start touring in Glasgow on 23 of October and we have plans for Europe, we hope to come soon. It’s is time after 6 years.

You guys you toured with Nothing More, Bullets for My Valentine, Raven Age…

Adam: Yes, Nothing More was probably the best and most valuable experience for us. We learned a lot from them and on the top, they are really nice lovely guys. Every night, we played with them I was on a side of the stage watching and taking notes down… we had so much to learn from them. They are one of the best band out there. They are really great.

Do you have a funny story from tour?

Adam: Yeah, I have many … we were playing in Wolverhampton, somewhere in the middle of nowhere and Dave jump off the stage half way of the last song and he broke his foot in 2 places.

He got up and he was still playing like going crazy and when the song finished, he collapsed. We had to carry him to the van. It was awful for him but we had so much fun.

By the way, which was your last gig you saw from the pit?

Adam: Hmm, good question. We went to see Bring Me the Horizon at Wembley – it was a crazy unbelievable show.

And obviously any show we play, we watch the bands we share the stage with.

Are you more CD or Vinyl?

Adam: I am more CD but I can see the attraction to vinyl. I just can’t bother to get a vinyl player but I think it is really cool.

You have some incredible tattoo what can you tell me about?

Adam: I love horror films so most of them are inspired from-  Freddy Krueger, the girl from The Exorcist.

I have a blossom tree – the story about this – first time when I saw The Exorcist, my favourite film of all times, I was in my living room and probably too young to watch this film and I remember it was this beautiful blossom tree outside my house. I made it to remember some good times.

I have this Mummy with the beautiful blue eye, it is not finished yet, it is saying that you never know who is inside and never judge someone of his appearance.

I have Medusa from the Clash of the Titans -another one of my favourite films-  Cowboys from Hell as I love Pantera.

I have the house where I grew up which is very important to me.

Well, I still have some room for others.

Cool, Thank you very much Adam

Pourquoi « In search of Sun »?